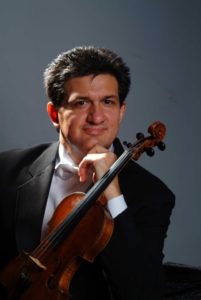 Valeri Glava has been a violin instructor at Renaissance Music Academy since 2010. Valeri currently plays at San Marcos square in the beautiful Venetian Hotel and Casino in Las Vegas, NV and travels the U.S. performing in concert and at private venues.  He is our Violin Instructor, Viola Teacher and Orchestra Director

Experience and Accomplishments
Valeri is fluent in Russian, French, Romanian and English.
Valeri was a well-known television artist in the USSR, receiving much acclaim for his contribution to music.
At age 23, Valeri conducted the orchestra and played solo violin by special invitation from the United Nations in New York.
At 26 he received his degree as Professor of Violin and taught at the Institute of Art for five years while performing worldwide.
Valeri accompanied Julio Iglasias and many other renowned artists onstage in his hometown of Chisinau, but his dream of coming to America was realized when Yakov Smirnoff invited him to join his show in Branson, MO. Valeri brought his own show to the stage in Branson in 2001.

AWARDS
“Branson’s Violinist of the Year”
“Branson’ Best New Show”
“Instrumentalist of the Year”
“Headliner of the Year”
For two years Valeri joined Connie Steven’s “Celebrity Gala” in Jackson, WY appearing with many of America’s top artists. Performing is his passion and he has performed for world leaders including Gorbachov and Yeltsin the Kremlin in Moscow and elite audiences in Paris, Montreal, Toronto, and throughout, Russia, Ukraine, Romania, Bulgaria, Germany, Cyprus, Belgium, Ethiopia and the United States.

History and Education
Considered a national treasure in his home country of Moldova, (Former USSR), Valeri began his violin instruction at a school for musically gifted children at eight years old. At the age of 15 he entered the Stefan Neaga College of Music and was later accepted at the “Gavriil Muzicescu” Conservatory of Music. There he expanded his repertoire with many different styles of music, gaining high acclaim in the music world. He graduated with the title of Violin Soloist and received degrees as Professor of Violin, and Conductor. “After hearing Valeri play, Merrill Osmond stated, “I have heard many talented musicians in the world, but Valeri is one of the most extraordinary…”

If you wish to enroll to our music school, kindly fill out the new student enrollment form.